Wisdom from a pack of Twinings? 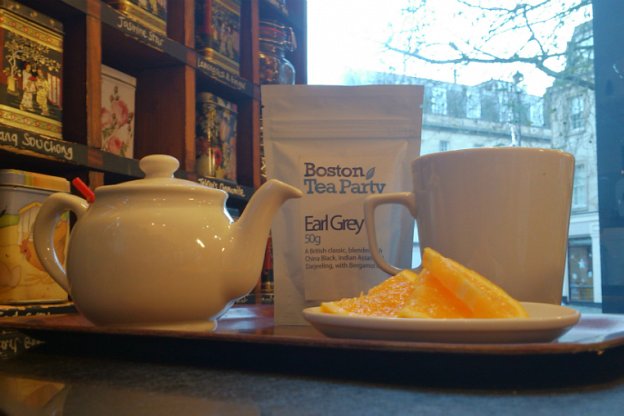 A long time ago, in a coffee shop half an hour from my house, a colleague of mine proclaimed a revelation. He had discovered, on the back of a pack of Twinings tea, that they recommended serving Earl Grey with a slice of orange and their Lady Grey* with a slice of lemon. It was an odd statement, given that to this very day, whenever someone orders Earl Grey, my immediate question is, “Do you take milk or lemon?” On some occasions, when whimsy strikes me, I will offer them a slice of orange and give them the spiel about the discovery my colleague made.

(*Fun Fact: Lady Grey is an official trademark brand name of Twinings tea. Only they can call it that.)

The other day, I was serving a gentleman who ordered Earl Grey. My customary question followed and he said words to the effect that, “Last time I was here I tried it with a slice of orange, so could I have that?” For a split second I was taken aback, but I swiftly recovered and declared in the affirmative. It transpired that I had served this man many, many moons ago and had evidently regaled him with the wisdom found on the back of a pack of Twinings.

Now, this post isn’t going to be all about the wise words found on the aforementioned brand’s pack of tea (I am now refusing to use the name of this brand as they no longer have relevance to the story), but about what those words inspired… SCIENCE! (Note: when proclaiming SCIENCE! it must always be done in an incredibly excitable, borderline mad-scientist manner. See Portal 2 and Cave Johnson’s many monologues for context). Okay, maybe not SCIENCE! Experimentation. Which is part of SCIENCE! (Yes, I will stop doing that. One day…)

Time to sidestep for a bit of temporal context. My colleague’s revelation came in 2011, when I had only just taken my first steps into the world of tea. Yes. I’m British and I’ve only been drinking tea since 2011. But I had to try twenty-two different varieties of tea before I found any that I actually liked. One of the top scorers was Lapsang Souchong, which became one of the first subjects of my experimentation. And it was a resounding success. Orange and Lapsang go very, very well together. It goes well with lemon too, but lemon’s a sharp contrast, whereas orange is a gentle complement to Lapsang’s glorious smokiness.

Lapsang Souchong is the only tea that I can speak about with a massive amount of authority. While other experiments were conducted, the majority of them were mainly… well… mainly on customers. I know, I know, I advanced the experimental phase to human trials without rigorously testing in the labs first. But… well, at the time I wasn’t really overwhelmingly concerned with the scientific process. I was a mad boffin and I had no time for procedure! However, there was informed consent – nobody was given anything if they didn’t agree to give it a try.

I should also briefly clarify that the experiments were only conducted with our black teas – Earl Grey had already been established as a success, Lapsang was brilliant, so all that remained were Assam, Boston Breakfast (at the time called Boston House Blend), Ceylon and Darjeeling. Of course, as a mad boffin throwing out diligent scientific procedures, I failed to keep an accurate record of the results. From my hazy memories, though, I remember there being a general trend towards positive feedback on the addition of a slice of orange.

So there you have it. Want a neat little twist to your cup of black tea? Then add a slice of citrus. Orange, lemon, even lime. Experiment and go wild. You might be surprised by the results…